The remains of the Tertiary Carmelites’ church and convent, or the Church and Convent of Our Lady of Mount Carmel, have finally achieved the status of a heritage site. It has been an arduous quest towards achieving this mission and the people of Chimbel deserve a substantial amount of praise in moving this issue forward.

The Tertiary Carmelites’ church and convent are a heritage of great value given that history sets the remains apart from most other such monuments; its singularity being the fact that it housed the first indigenous order of lower caste priests. The rule of the day was only upper caste Brahmins were allowed to be part of priestly orders.

Chimbel’s so called green space marked on the regional plan does not have any tree cover and has been demarcated along the Kadamba plateau off the highway, which makes it a prime target for builders. Once the builders move in, any tree cover at all is compromised. The Tertiary Carmelites’ church and convent are part of the few green spaces left in Chimbel, and therefore this was one significant reason to protect the heritage structure. 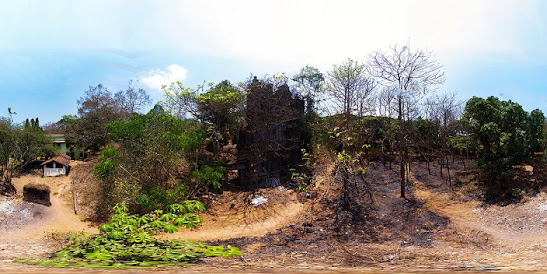 The village of Chimbel consists of two parts: one is Indranagar, the slum area, and the other is the village proper. There are panchayat members from both areas of Chimbel and discord between the two groups is not unheard of. The region around the Chimbel ruins could well provide an open space as a meeting ground to diffuse the social tension between the two groups. Although there is the church compound which is an open space, most places affiliated to religious organisations normally draw people from that religious community and are therefore not useful in building bonds between populations of diverse religious. Architect Fernando Velho who spearheaded the awareness campaign to preserve the Carmelite convent and church in Chimbel says the space around the ruins could provide a multi-community friendly space by developing it into a community park. The area in front of it could be turned into a football ground. ‘In Chimbel today, there isn’t a secular space as such where people of different communities can come together,’ says Fernando.

It was after one of his initial talks on the topic of the ruins that Fernando was approached by a priest who was a native of Chimbel to generate awareness of the importance of the monuments among the people of the village. This prompted Fernando to continue with his talks at the village, following which the villagers formed a committee for the restoration of the Tertiary Carmelites’ church and convent. The village committee approached the Charles Correa Foundation, Edgar Ribeiro, Prajal Sakardhande, and the Goa Heritage Action Group among others to extend a helping hand towards this cause. Fernando says, ‘They mobilised enough people within the village also and then petitioned Vijai Sardesai. In two weeks it was declared a heritage monument. It is the first time since 1984 that a structure has been declared a heritage monument.’ It is indeed a notable event as the list of heritage monuments has been opened after 35 years. 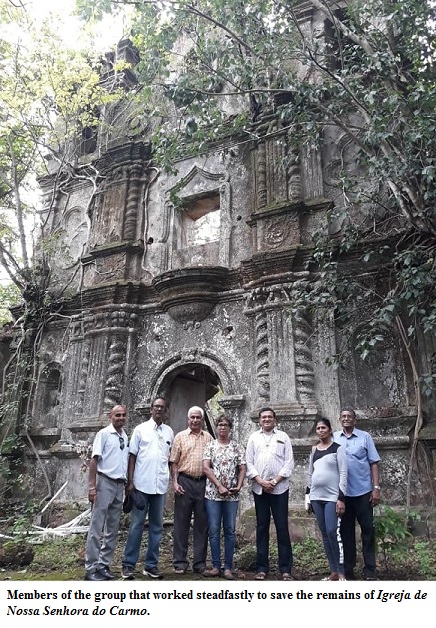 The early years of Catholicism in Goa saw only Europeans in positions of power within the Church. In time the local elite, that is the Brahmins, became involved in revolts such as the Pinto Revolt and dissensions against the Portuguese. This led to the Portuguese making concessions to the Brahmins and permitting them greater power within the Church. In 1742, the bishop gave permission to construct a convent specifically for non-Brahmin priests. These were the Tertiary Carmelites, a native order that was meant for non-Brahmins. The other native order begun by St Jose Vaz, the Oratorians, remained reserved for Brahmins.

In 1835 all religious orders were banned in Goa and the result was that the church and convent of the Tertiary Carmelites were handed over to the Santa Casa da Misericórdia, today’s Provedoria. Orphan girls from the Recolhimento de Nossa Senhora da Serra and women of questionable reputation who had changed their ways from the Recolhimento de Santa Maria Madalena were moved into the convent.

Sir Richard Francis Burton, the British explorer and writer, is said to have visited the convent, finding it a strange setting. The nuns would bring up the orphans and await suitable grooms for the girls. Sir Richard Burton inveigled his way into the convent to investigate its workings. He was presented with an array of girls to choose from and assured a dowry if he should marry one of them. While all this made an interesting addition to his travelogue, Sir Richard Burton did not return to the convent.

In the 1920s, the inmates of Recolhimento de Nossa Senhora da Serra were moved to Altinho, Panjim. Gradually the convent was abandoned by its previous inmates, and Goa’s first mental health facility Misericórdia’s Asilo dos Alienados was instituted at the convent. This is where Dr Adelia Costa, one of Goa’s pioneers in mental health treatment, began her practice. The mental health facility too was shifted to Altinho. The building remained abandoned once again while the government built an old age home in front of it. In 1994, the Provedoria demolished two wings of the convent, leaving a lone standing church structure that was too narrow and too high, leading to its gradual collapse and the resultant remaining façade of the Igreja de Nossa Senhora do Carmo. ‘Now that people have realised its significance, they are keen on preserving whatever is left of it,’ says Fernando.

Ana Gracias, the secretary of the Mount Carmel Restoration Forum who has worked tirelessly with others to petition for the preservation of the Church and Convent of Nossa Senhora do Carmo says, ‘It is a proud moment for me and my villagers. Chimbel was known for notorious characters. At least now we can create a new scenario. We have an identity now with the declaration of the church and convent as a heritage site. We intend to preserve it. Chimbel has no open space where senior citizens can sit, people can come together … no community hall. We want to ask the people what exactly it is that they want here.’

Indeed, there is a new tide of change that heralds positivity and felicity for the people of Chimbel and those who side with the conservation of our Goan heritage.